A Valentine’s Day free read from the Gate Deadlock series.

A free read for my distracted readers today: Chapter 14 from my first time-travel story Gate Deadlock #1

‘Free rope!’ I shouted after I had put my feet on the ground and released the ascender, unhooking it from my safety belt. I felt hot although it was only 14ºC inside the cave, and my cheeks were burning with excitement. Stratos was right. Ascending was much more difficult than descending, but the right equipment and guidance by an expert like him, had made things much easier. I had copied his every movement, followed his instructions step by step, and I finally made it through.

Stratos looked at me concerned as he asked ‘Was it that bad?’

‘No. It was great!’ I replied, apparently excited but making an effort to control my voice, as I was still out of breath. Ascending wasn’t the best thing I could do to my still sensitive spine. My back was sending me warning signs. Stratos shook his head meditatively, obviously concerned about me.

‘You should take some rest until the others join us. I’ll check on Nick.’ he said, heading to the edge of the precipice.

I was leaning with my back against the cave wall. I let myself slide down slowly until I felt the hard bottom of the cave. I curled with my head on my knees, my arms embracing my legs. All we had to do now was walk for about five kilometers to the exit of the cave. It was a magnificent spectacle, a path among snow-white stalactites, carved by water flows in past geological periods, thousands of years ago.

I opened my backpack and took out the small box of painkillers that had been my permanent companions ever since the accident. I took a couple of them and swallowed them quickly with the help of the cool water I was carrying in my thermos. It was a good thing Stratos did not notice that. The last thing I needed now was to attract their attention, to look helpless and weak. The plan was to make them believe I was capable of taking care of myself, even a little edgy when they offered to help me, so that it would be easier to carry out Plato’s orders.

Nick looked really excited when his face popped out from the gap on the cave surface. For amateurs, we had both done really well. Stratos and Panos were experienced cavers and had been extremely eager to induce us to the thrill of cave exploration. This specific expedition was especially thrilling as the cave had been restricted area for the last ten years and its exploration required special permission by the authorities. But that was the point, to attract attention. Not the local authorities’ attention of course. We had decided to take our chances instead of waiting for months for permission to explore the cave. My companions had been highly enthusiastic about it from the very first moment.

Half an hour later, we started our journey back. We found the opening that had amazed me when we were looking for the precipice. A natural monument, a creation of time, water and rock. A magical, mystical place that had given birth to legends of gods, heroes, fairies and nymphs. The natural decoration was astounding. White stalactites were hanging from the ceiling and either united in magnificent pillars with their other half that was uplifting from the bottom, or struggling to meet each other’s sharp pick, drop by drop, inch by inch, patiently waiting throughout the ages, certain that it was inevitable for them to be united some day, to become one.

We were only a few meters from the exit. I could already see the blinding daylight at the end of the tunnel. Plato’s orders were to stay back a little before the exit so that he Crusaders had time to save Nick, Panos and Stratos from the Squad who would be on their way to get us, protecting another Gateway, extremely valuable to the League. I was sure that the Crusaders would already be waiting for us outside, disguised as local policemen, pretending to arrest the cavers for trespassing. Then, I would have to wait for no more than five minutes until the Squad would be here to get me.

I shivered at the thought of facing Tex’s cruel face, but this was the last thing I cared about. I hoped that Christopher would be among them, that he would have come for me despite his last

warning. It had been so long since I had last seen him. Plato had not neglected to warn me that I should control myself when I would see him again, otherwise the whole plan would go up in smoke.

I stopped, pretending to be looking for something.

‘Damn!’ I said. Panos had stopped behind me.

‘I left my backpack at the last bent where I stopped for water.’

‘I’ll get it for you. You go ahead.’ he volunteered to help me.

‘No!’ I replied, a little too abruptly. ‘I can do it myself. I can see it from here.’ I pointed to the red bag with my flashlight.

‘You go ahead. I’ll meet you outside.’

Panos hesitated for a moment. Then he shrugged and walked past me. I was almost at the bent, when I heard voices arguing.

‘Stay here!’ Panos shouted at me as he ran to join the others. I was sure that the Crusaders outnumbered my friends. My ignorant companions would have to do what the “policemen” asked them. I knew the Crusaders were supposed to take them a few kilometers away, in a safe distance, until the Squad had finished with me. Plato had personally guaranteed that no harm would happen to the three cavers, sharing my persistence in keeping them safe at any cost. I did not want to be an accessory for another death. Somehow, Yannis’ blood still felt hot on my hands.

I ducked waiting, until the voices and the sound of the cars faded away. Then I stood up again and started walking towards the exit. Now it was a good time to start panicking. But, surprisingly enough, I was not panicked. I was extremely anxious to see Christopher, this was the only emotion that overwhelmed my whole existence at that moment and there was no room for fear and panic.

It was very silent outside. I looked around. I was all alone, or at least it seemed so, 340 meters above the sea.

I was not ignorant of the place.

My father had told me stories about this mountain where you’re surrounded by the fairies of the source of the immortal water. The ancient gods took their oaths on this mountain. It was here that the deity of Soul went through incredible ordeals when she was searching for her sweetheart, Cupid. The legend is that she still wanders on the frosty peak, leaving her elf-tracks on the soft snow. The dreadful queenStyx lived on this sacred mountain, Zeus’ally in his war with the Titans. She had the power to punish the Olympian gods if they broke their oaths. Her palace was in front of the Gate of Ades, the gate to the Underworld, to death. It’s no wonder why the locals had respected that place and considered the opening of roads and the intrusion of technology on the sacred slopes that had been protected by the millennium-lasting awe, a hubris, an abuse.

I wished my father’s stories had been true. I wished I could invoke the ancient spirits to protect Christopher and me. But reality was so uninspiring, so dramatic and terrible at the same time.

I walked to the jeep and got rid of the equipment I was carrying, aware of the fact that Tex might be hiding among the trees behind me, watching, waiting for the right moment to terrify me the most. My mouth felt dry and I looked for some water, as my thermos was empty. Stratos had left a spare thermos in the jeep but I could not find it. I bent down to look for it under the passenger seat. I stretched my arm to reach it.

Then I heard the cold voice behind me, the voice that had haunted my dreams for so long.

‘At last! We meet again!’ He spoke slowly, softly, and his voice was sarcastic as always, mocking me. My body stiffened at once but I tried to keep my temper. I did not care if he wanted to hurt me. I was dying to see the beautiful face I had been missing for so long. Was he standing there? Right behind me?

I turned around slowly, my face frozen, expressionless, but my heart was about to jump out of my chest.

FREE for my Newsletter subscribers!

Have you ever thought that the present reality can be predetermined and constantly monitored by the dark forces of the future world with the only aim to protect their own reality? Could the present and the future be evolving simultaneously? What if you suddenly discovered that everything you have considered to be your own choices were nothing but inevitable responses to the sly directions of the future? Even worse, what if it was your heart that betrayed you by selecting the future?
When Emma meets Christopher, it isn’t long before the handsome, hunky young man manages to sweep her completely off her feet. Seeing him as her “guardian angel,” Emma can’t help falling head over heels for the magnificent specimen she sees as the perfect man; however, as time goes on, Emma eventually learns disturbing truths about her father’s tragic death – truths that, surprisingly to her, actually involve Christopher – forcing her to reconsider the depths of her feelings once his true identity is finally revealed…
Gate Deadlock, a time-travel romance, will share with you the secrets of the future and of forbidden love. 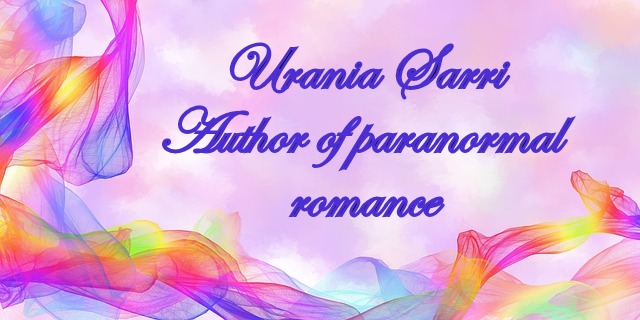 I am an indie, self-published author of paranormal fiction, a teacher and a linguist.

One thought on “A Valentine’s Day free read from the Gate Deadlock series.”

Urania Sarri lives in Korinthia, Greece with her husband and sons. She holds a BA in English Language and Literature, an Msc in Teaching English to speakers of other languages (TESOL) and a PhD in Languages and Social Sciences. She specializes in teaching English to children and young adults and she totally adores her job. While doing so, she takes any opportunity to convey to her students the passion of reading. She is fascinated by paranormal stories and appreciates good romance whenever she gets her hands on it!

READ MY STORIES ON WATTPAD